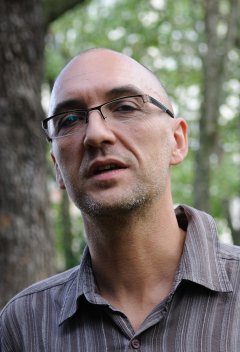 Didier Verna has a Ph.D. and an habilitation in Computer Science, and is currently working as a professor for EPITA, a private Computer Science university located in Paris. He gives or has given lectures on Operating Systems, Computer Graphics, Object-Oriented, Functional Programming and Typesetting. His main research interests are multi-paradigm approaches to genericity and performance.

Didier Verna is also quite involved in free software: he was one of the core maintainers of XEmacs for more than 15 years, a contributor to Gnus and BBDB, and an occasional contributor to other Free Software projects (the GNU Autotools most notably; he was one of the technical reviewers for the “Goat Book”). He is the author of several LaTeX packages and Common Lisp libraries.

All of this is in fact half-true: two days a week, Didier Verna drops his scientific hat and wears the semi-professional Jazz musician one instead (he has released 3 albums with his quartet). He also is a certified Aikido teacher, and gives coaching sessions on the theme “Aikido and Conflict Management” for large companies.